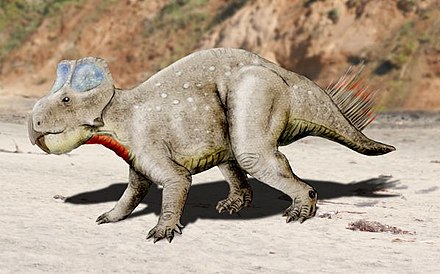 Zhuchengceratops is a genus of extinct leptoceratopsid ceratopsian that lived during the Upper Cretaceous of modern-day China. It was first described in 2010, by Xu et al., who created the binomial Zhuchengceratops inexpectus. The name is derived from the location of Zhucheng, the Latinized-Greek ceratops, or "horned face", and the unexpected articulated nature of the holotype. The skeleton was found in the Wanshi Group, which is of Late Cretaceous age, and most fossils are only disarticulated bones of Shantungosaurus.