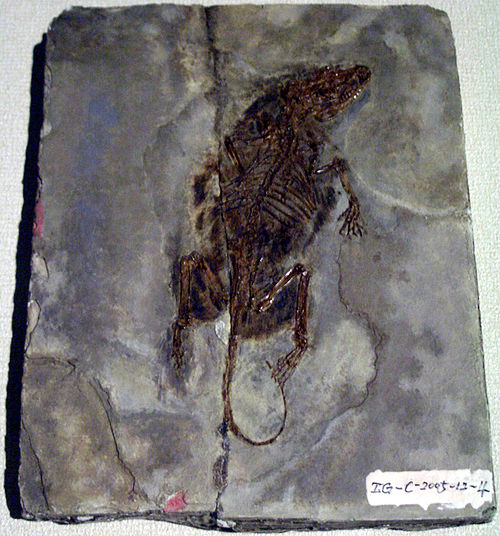 Zhangheotherium is a genus of symmetrodont, an extinct order of mammals. Previously known from only the tall pointed crowned teeth, Zhangheotherium, described from Liaoning Province, China, fossils in 1997, is the first symmetrodont known from a complete skeleton. It was dated to between 145-125 million years ago in the Cretaceous. A single species, Zhangheotherium quinquecuspidens, is known.

Symmetrodonts and other archaic mammals such as multituberculates and monotremes are still being debated on their taxonomical relationships. Zhangheotherium has many primitive characteristics. Among them is a spur at the foot, seen today in the modern platypus. In addition, it walked with a reptilian sprawl, like Monotremes and many Mesozoic mammals such as Jeholodens and Repenomamus. Recent studies show that it led a possibly scansorial lifestyle, possessing long hindlimbs and a large plantar area on the foot, both optimal for climbing.

The specimen GMV 2124 of the feathered dinosaur Sinosauropteryx? sp. contained two jaws of Zhangheotherium in its stomach region (Hurum et al. 2006). Thus, it seems to have preyed on this primitive mammal, possibly on a regular basis.