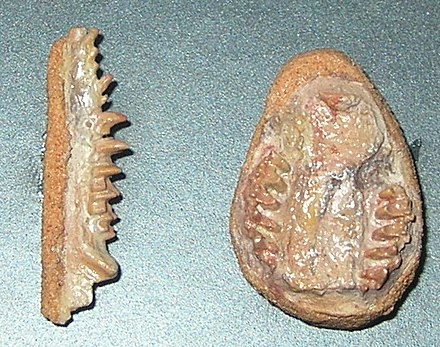 Zalambdalestes (meaning much-like-lambda robber) was a eutherian mammal, most likely not a placental due to the presence of an epipubic bone, living during the Upper Cretaceous in Mongolia.

Zalambdalestes was a hopping animal with a long snout, long teeth, a small brain and large eyes. It was about 20 centimetres (7.9 in) long, with a head only 5 centimetres (2 in) long. It had strong front paws and even stronger rear ones, sharing speciations to saltation similar to those of modern rabbits. However its claws were not opposable, so it is unlikely to have climbed trees.

Its diet was probably composed mainly of insects that it hunted in the forest undergrowth using its sharp, interlocking teeth. Unlike modern placental mammals, Zalambdalestes had an epipubic bone, meaning it was probably restricted reproductively in the same way as modern monotremes and marsupials.