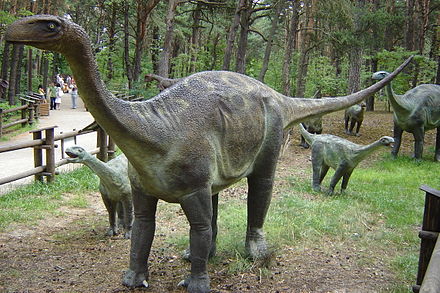 Vulcanodon (meaning "volcano tooth") is an extinct genus of sauropod dinosaur from the Early Jurassic of southern Africa. The only known species is V. karibaensis. Discovered in 1969 in Rhodesia (now known as Zimbabwe), it was regarded as the earliest known sauropod for decades, and is still one of the most primitive sauropods that has been discovered. As a quadrupedal, ground-dwelling herbivore, Vulcanodon already showed the typical sauropod body plan with column-like legs and a long neck and tail. It was smaller than most other sauropods, measuring approximately eleven metres (35 ft) in length. Vulcanodon is known from a fragmentary skeleton including much of the pelvic girdle, hindlimbs, forearms, and tail, but lacking the trunk and neck vertebrae as well as the skull.

Originally, this genus was believed to be a prosauropod because of the knife-shaped teeth found near its fossils, which fit in with the idea that prosauropods were omnivorous. Scientists now know that the teeth belonged to an unidentified theropod that may have scavenged on the Vulcanodon carcass. Vulcanodon is now known to be a true sauropod. Upon the discovery of the related Tazoudasaurus, both animals were unified in the family Vulcanodontidae, though this has not been universally accepted.