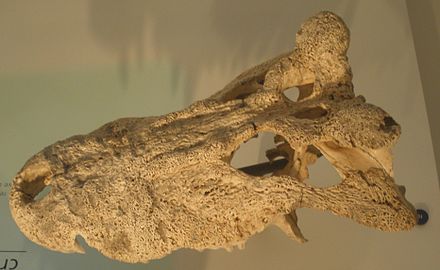 Voay is an extinct genus of crocodile from Madagascar and includes only one species--V. robustus. Numerous subfossils have been found, including complete skulls as well as vertebrae and osteoderms from such places as Ambolisatra and Antsirabe. The genus is thought to have become extinct relatively recently during the Holocene. It has even been suggested to have disappeared in the extinction event that wiped out much of the endemic megafauna such as the elephant bird following the arrival of humans to Madagascar around 2000 years ago.

Its size, stature, and presumed behavior is similar to the modern Nile crocodile (Crocodylus niloticus). Because V. robustus shared so many similarities with the Nile crocodile there must have been a great deal of interspecific competition for resources between the two crocodile genera if they were to have coexisted with one another. It has recently been proposed that the Nile crocodile only migrated to the island from mainland Africa after V. robustus had gone extinct in Madagascar.