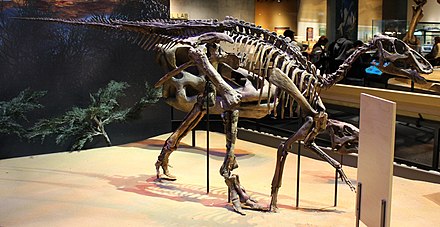 Ugrunaaluk is a dubious genus of saurolophine hadrosaurid which was found in the Arctic of Alaska. It contains the species Ugrunaaluk kuukpikensis. Its name is derived from the Inupiat words for 'ancient grazer'.

From the 1980s onwards, in Alaska more than six thousand bones of hadrosaurid dinosaurs have been uncovered, at the Colville River. They were found north of Umiat in the Liscomb bonebed. At first they were identified as belonging to some member of the Lambeosaurinae. Later, they were referred to Edmontosaurus, more specifically Edmontosaurus regalis, a member of the Saurolophinae. A definite identification was hampered by the fact that most of the bones were of juveniles. In 2014, Hirotsugu Mori solved this problem by statistically determining size classes within the fossil material and comparing the Alaskan bones with known Edmontosaurus annectens specimens of the same size. He concluded that they represented two separate species.

The discovery of the new genus was published online on 22 September 2015 by Hirotsugu Mori, Patrick Druckenmiller and Gregory Erickson. Ugrunaaluk was one of eighteen dinosaur taxa from 2015 to be described in open access or free-to-read journals. However, the identification of Ugrunaaluk as a separate genus was questioned by a 2017 study from Hai Xing and colleagues, who regarded it as a nomen dubium indistinguishable from other Edmontosaurus.