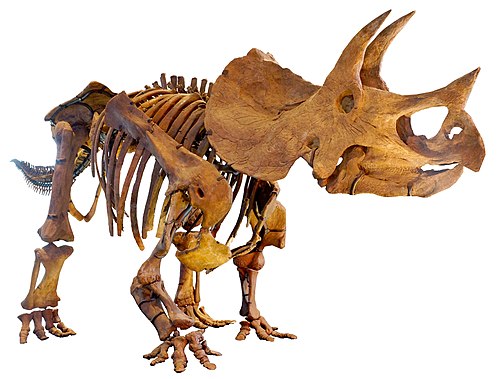 Triceratops is a genus of herbivorous ceratopsid dinosaur that first appeared during the late Maastrichtian stage of the late Cretaceous period, about 68 million years ago (mya) in what is now North America. It is one of the last known non-avian dinosaur genera, and became extinct in the Cretaceous-Paleogene extinction event 66 million years ago. The term Triceratops, which literally means "three-horned face", is derived from the Greek tri- (tri-) meaning "three", keras (keras) meaning "horn", and ops (ops) meaning "face".

Bearing a large bony frill and three horns on its large four-legged body, and possessing similarities with the modern rhinoceros, Triceratops is one of the most recognizable of all dinosaurs and the best known ceratopsid. It shared the landscape with and was probably preyed upon by Tyrannosaurus, though it is less certain that the two did battle in the manner often depicted in traditional museum displays and popular images.

The exact placement of the genus Triceratops within the ceratopsid group has been debated by paleontologists. Two species, T. horridus and T. prorsus, are considered valid, although many other species have been named. Research published in 2010 suggested that the contemporaneous Torosaurus, a ceratopsid long regarded as a separate genus, represents Triceratops in its mature form. The view was immediately disputed and examination of more fossil evidence is expected to settle the debate.

Triceratops has been documented by numerous remains collected since the genus was first described in 1889, including at least one complete individual skeleton. Paleontologist John Scannella observed: "It is hard to walk out into the Hell Creek Formation and not stumble upon a Triceratops weathering out of a hillside." Forty-seven complete or partial skulls were discovered in just that area from 2000 to 2010. Specimens representing life stages from hatchling to adult have been found.

The functions of the frills and three distinctive facial horns on its head have long inspired debate. Traditionally, these have been viewed as defensive weapons against predators. More recent theories, noting the presence of blood vessels in the skull bones of ceratopsids, find it more probable that these features were primarily used in identification, courtship and dominance displays, much like the antlers and horns of modern reindeer, mountain goats, or rhinoceros beetles. The theory would find additional support if Torosaurus was found to be the mature form of Triceratops, as this would mean the frill also developed holes (fenestrae) as individuals reached maturity, rendering the structure more useful for display than defense.

As the archetypal ceratopsid, Triceratops is one of the most popular dinosaurs, and has been featured in film, postal stamps, and many other types of media.