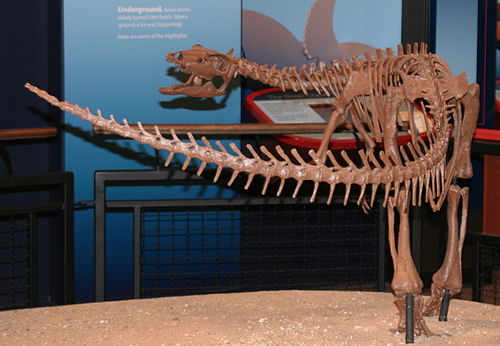 Thescelosaurus ( THESS-il-a-SOR-as; ancient Greek theskelos-/theskelos- meaning "godlike", "marvelous", or "wondrous" and sauros/sauros "lizard") was a genus of small ornithopod dinosaur that appeared at the very end of the Late Cretaceous period in North America. It was a member of the last dinosaurian fauna before the Cretaceous-Paleogene extinction event around 66 million years ago. The preservation and completeness of many of its specimens indicate that it may have preferred to live near streams.

This bipedal ornithopod is known from several partial skeletons and skulls that indicate it grew to between 2.5 and 4.0 meters (8.2 to 13.1 ft) in length on average. It had sturdy hind limbs, small wide hands, and a head with an elongate pointed snout. The form of the teeth and jaws suggest a primarily herbivorous animal. This genus of dinosaur is regarded as a specialized basal ornithopod, traditionally described as a hypsilophodont, but more recently recognized as distinct from Hypsilophodon. Several species have been suggested for this genus. Three currently are recognized as valid: the type species T. neglectus, T. garbanii and T. assiniboiensis.

The genus attracted media attention in 2000, when a specimen unearthed in 1993 in South Dakota, United States, was interpreted as including a fossilized heart. There was much discussion over whether the remains were of a heart. Many scientists now doubt the identification of the object and the implications of such an identification.