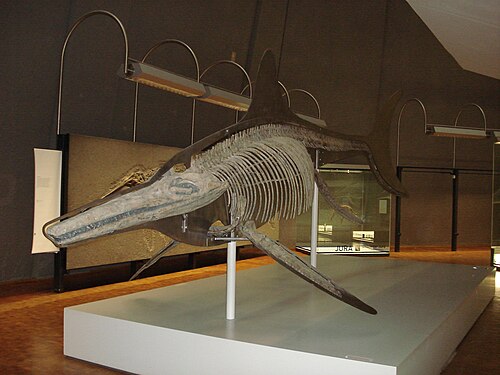 Temnodontosaurus (Greek for "cutting-tooth lizard" - temno, meaning "to cut", odont meaning "tooth" and sauros meaning "lizard") is an extinct genus of Ichthyosaurs from the Early Jurassic, ranging between 200 and 175 million years ago (Hettangian - Toarcian), and known from Europe (England, France, Germany and Belgium). They lived in the deeper areas of the open ocean. University of Bristol paleontologist Jeremy Martin described the genus Temnodontosaurus as "one of the most ecologically disparate genera of Ichthyosaurs".

Temnodontosaurus are known for being gigantic Ichthyosaurs. According to the paleontologist Michael Maisch, species of Temnodontosaurus were large, exceeding 12 meters (39 ft) in length. There is a possibility that they reached a similar size to another giant Ichthyosaur, Shonisaurus popularis, which was previously considered the largest Ichthyosaur. There seems to be a general consensus between paleontologists that they could at least have reached 9m.

Temnodontosaurus are known for their incredibly large eyes. Their eyes are thought to be the largest of any animal ever known. Temnodontosaurus eyes were approximately 20 cm (8 in) in diameter making them some of the largest of any known vertebrate. They have a tail bend which is characteristic of Jurassic age Ichthyosaurs. and they have many conical teeth that fill their jaw and are set in a continuous groove.