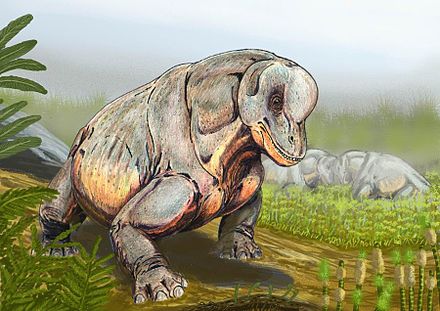 Tapinocephalus ("humble head") is a genus of large herbivorous dinocephalian that lived during the Middle Permian Period. These stocky, barrel-bodied animals were characterised by a massive bony skull roof and short weak snout. It is thought that, like the rest of the members of its family, the animals engaged in head-butting intraspecific behavior, possibly for territory or mates.

The fossil remains (skull and postcranial elements) of Tapinocephalus are known from the Lower, Middle, and Upper part of the Tapinocephalus Assemblage Zone ( Capitanian age) of the Lower Beaufort Beds of the South African Karoo. Only the type species, T. atherstonei is now considered valid for this genus.