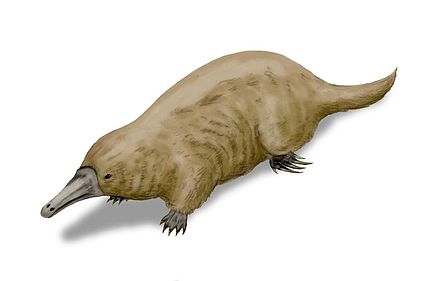 Steropodon galmani was a prehistoric species of monotreme, or egg-laying mammal, that lived during the middle Albian stage, about 105 million years ago, in the Lower Cretaceous period. It is thought to be one of the earliest monotremes.

Steropodon is known only from a single opalised jaw with three molars, discovered at the Griman Creek Formation, Lightning Ridge, New South Wales, Australia, by brothers David and Alan Galman. It was a large mammal for the Mesozoic, being 40-50 cm long. The lower molars are 5-7 mm in length, with a width of 3-4 mm. A length of 1-2 cm is more typical for Mesozoic mammals. Also from Lightning Ridge is Kollikodon ritchiei.

The molars "bear striking resemblance to the tribosphenic pattern characteristic of living therians..." (Pascual). However, there are also differences: there is no entoconid, and an absence of wear seems to suggest that the upper molars (as yet unknown) did not have a protocone, and so implying that there was a double origin of tribosphenic teeth, one group represented by the living placentals and marsupials, and the other group being the monotremes bearing 'pseudo-tribosphenic' teeth.

Woodburne (2003, p. 212) reports that the holotype is a right mandible named AM F66763. The preserved molars are m1-m3. Page 237 includes: "In Steropodon, the mandibular canal suggests the presence of a bill, with a bill also known in Obdurodon dicksoni and Ornithorhynchus anatinus."

A fine photo of the opalised lower jaw can be found on page 182 in: