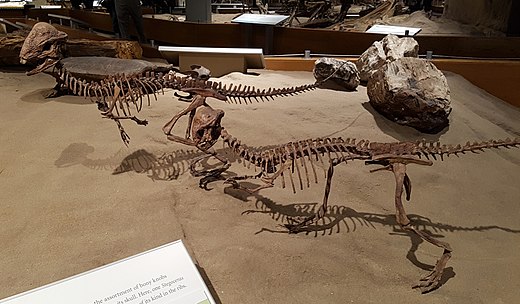 Stegoceras () is a genus of pachycephalosaurid (dome-headed) dinosaur that lived in what is now North America during the Late Cretaceous period, about 77.5 to 74 million years ago (mya). The first specimens from Alberta, Canada, were described in 1902, and the type species S. validum was based on these remains. The generic name means "horn roof", and the specific name means "strong". Several other species have been placed in the genus over the years, but these have since been moved to other genera or deemed junior synonyms. Currently only S. validum and S. novomexicanum, named in 2011 from fossils found in New Mexico, remain. The validity of the latter species has also been debated.

Stegoceras was a small, bipedal dinosaur about 2 to 2.5 metres (6.6 to 8.2 ft) long, and weighed around 10 to 40 kilograms (22 to 88 lb). It had a rigid vertebral column, and a stiffened tail. The pelvic region was broad, perhaps due to an extended gut. The skull was roughly triangular with a short snout, and had a thick, broad, and relatively smooth dome on the top. The back of the skull had a thick "shelf" over the occiput, and it had a thick ridge over the eyes. Much of the skull was ornamented by tubercles (or round "outgrowths") and nodes (or "knobs"), many in rows, and the largest formed small horns on the shelf. The teeth were small and serrated. The skull is thought to have been flat in juvenile animals and to have grown into a dome with age.

Originally known only from skull domes, Stegoceras was one of the first known pachycephalosaurs, and the incompleteness of these initial remains led to many theories about the affinities of this group. A complete Stegoceras skull with associated parts of the skeleton was found in 1924, which shed more light on these animals. Pachycephalosaurs are today grouped with the horned ceratopsians in the group Marginocephalia. Stegoceras itself has been considered basal (or "primitive") compared to other pachycephalosaurs. Stegoceras was most likely herbivorous, and it probably had a good sense of smell. The function of the dome has been debated, and competing theories include use in intra-specific combat (head or flank-butting), sexual display, or species recognition. S. validum is known from the Dinosaur Park Formation and the Oldman Formation, whereas S. novomexicanum is from the Fruitland and Kirtland Formation.