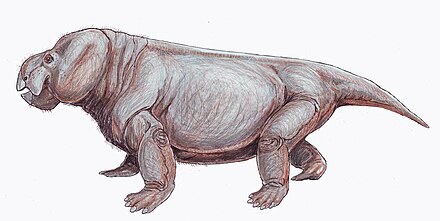 Stahleckeria is an extinct genus of Middle Triassic dicynodont. It lived about 240 million years ago in what is now Brazil and Namibia. As a member of the group Kannemeyeriiformes, it was similar to the genus Kannemeyeria. The genus is known from thetype species Stahleckeria potens, which was first collected from the Ladinian-age Santa Maria Formation in the Paleorrota fossil site of Brazil. Stahleckeria was named in honor of Rudolf Stahlecker, who discovered the first specimens during a 1935 expedition led by paleontologist Friedrich von Huene to the Chiniqua fossil site.

Stahleckeria measured 4 metres (13 ft) in length and weighed approximately 400 kilograms (880 lb). It was a contemporary of the more common Dinodontosaurus. The differences between Stahleckeria and Dinodontosaurus may reflect adaptations to feeding on different plant species.

In 2012, fossils of Stahleckeria potens were described from the Omingonde Formation in Namibia, which like the Santa Maria Formation is Ladinian in age. The Omigonde Formation is part of the Karoo Supergroup, which preserves many Triassic tetrapod fossils in southern Africa but notably lacks fossils in a hiatus called the "Ladinian gap". In addition to the remains of Stahleckeria potens, fossils of the cynodont Chiniquodon and an unidentified rauisuchian have also been found in the Omigonde deposits. The presence of these animals in South America and in Africa at the same time is strong evidence that the two continents were once one uninterrupted landmass with a uniform climate and habitat that land animals such as Stahleckeria could travel freely between.

The fossils of Stahleckeria potens discovered in Brazil are currently in Germany in the museum of the University of Tubingen.