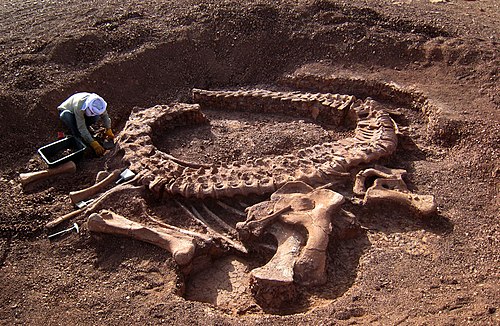 Spinophorosaurus (meaning 'spine-bearing lizard') is a genus of early sauropod dinosaur from Niger. It was recovered in a rock formation belonging to the lower part of the Irhazer Group, the age of which is unknown but may be Middle Jurassic or older. It is unusual for having spiked osteoderms, probably from the tail, similar to the famed thagomizer of stegosaurs. The type species, S. nigerensis, was described by Remes et al. in 2009. A study of its braincase showed that its neuroanatomy was in some ways intermediate between that of basal sauropodomorphs and that of neosauropods. It was about 13 metres (43 ft) long and weighed about 7 metric tons (7.7 short tons).