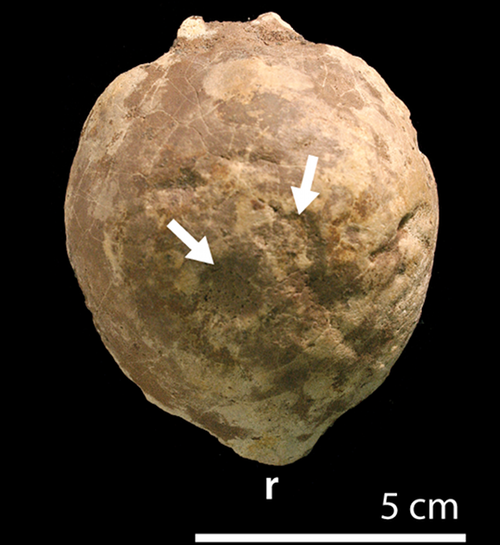 Sphaerotholus is a genus of pachycephalosaurid dinosaur from the Upper Cretaceous of the western United States and Canada. To date, three species have been described: the type species, S. goodwini, from the Den-na-zin Member of the Kirtland Formation (Late Campanian) of San Juan County, New Mexico, USA; S. buchholtzae, from the Hell Creek Formation (Late Maastrichtian) of western Carter County, Montana, USA; and S. edmontonense, from the Horseshoe Canyon Formation of Alberta, Canada. The etymology of Sphaerotholus is a combination of the Greek sphaira, meaning "ball", and tholos, meaning "dome", and is a reference to the characteristically dome-shaped pachycephalosaurian skull. The survival of Sphaerotholus from the Campanian of New Mexico to the end of the Maastrichtian of Montana demonstrates that this taxon had both a relatively long duration (approximately 7-8 million years) and a widespread distribution. Williamson and Carr, who first described the genus in 2002, diagnose it as follows: "Differs from all other pachycephalosaurids where known in the possession of a parietosquamosal bar that decreases in depth laterally as seen in caudal view and is bordered by a single row of nodes and one lateroventral corner node." Sphaerotholus is considered a highly derived pachycephalosaur.