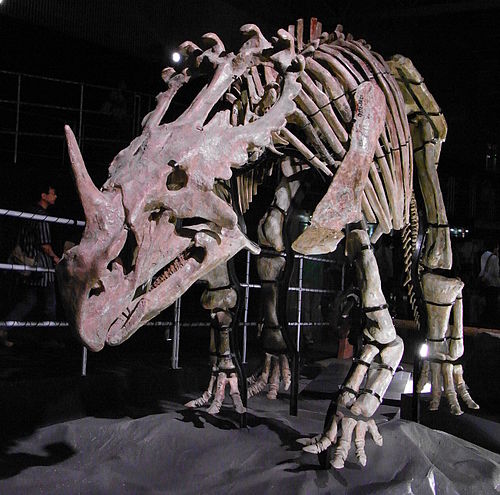 Sinoceratops is an extinct genus of ceratopsian dinosaur that lived approximately 72 to 66 million years ago during the latter part of the Cretaceous Period in what is now Shandong province in China. It was named in 2010 by Xu Xing et al. for three skulls from Zhucheng, China. The name of its type species Sinoceratops zhuchengensis means "Chinese horned face from Zhucheng", after the location of its discovery.

Sinoceratops was a medium-sized, averagely-built, ground-dwelling, quadrupedal herbivore. It could grow up to an estimated 6 m (19.7 ft) length and 2 metres (6.6 ft) height, and weigh up to 2 tonnes (2.0 long tons; 2.2 short tons). It was the first ceratopsid dinosaur discovered in China, and the only ceratopsid known from Asia. All other centrosaurines, and all chasmosaurines, are known from fossils discovered in North America, except for possibly Turanoceratops. Sinoceratops is also significant because it is one of the largest known centrosaurines, and is much larger than any other known basal members of this group.