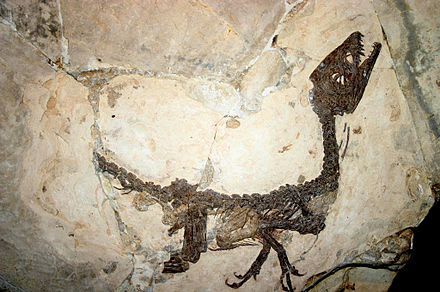 Scipionyx (pronounced "SHIH-pee-oh-nicks" or "ship-ee-OH-nicks") is a genus of compsognathid theropod dinosaur from the Early Cretaceous of Italy, around 113 million years ago.

There is only one fossil known of Scipionyx, discovered in 1981 by an amateur paleontologist and brought to the attention of science in 1993. In 1998 the type species Scipionyx samniticus was named, the generic name meaning "Scipio's claw". The find generated much publicity because of the unique preservation of large areas of petrified soft tissue and internal organs such as muscles and intestines. The fossil shows many details of these, even in the internal structure of some muscle and bone cells. It was also the first dinosaur found in Italy. Because of the importance of the specimen, it has been intensely studied.

The fossil is that of a juvenile only half a metre (twenty inches) long and perhaps just three days old. The adult size is estimated to have been about two metres (6.5 feet). Scipionyx was a bipedal predator, its horizontal rump balanced by a long tail. Its body was probably covered by primitive feathers but these have not been found in the fossil, that is without any skin remains.

In the guts of the fossil some half-digested meals are still present, indicating Scipionyx ate lizards and fish. Perhaps these had been fed to the young animal by its parents. Several scientists have tried to learn from the position of the internal organs how Scipionyx breathed, but their conclusions often disagree.