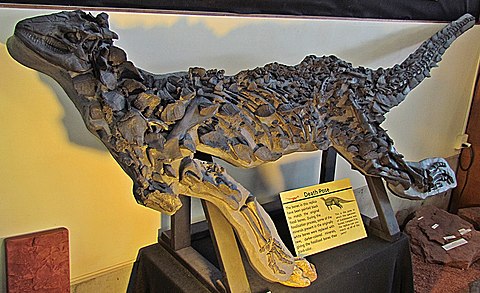 Scelidosaurus (with the intended meaning of "limb lizard", from Greek skelis/skelis meaning 'rib of beef' and sauros/sauros meaning 'lizard') is a genus of herbivorous armoured ornithischian dinosaur from the Jurassic of England.

Scelidosaurus lived during the Early Jurassic Period, during the Sinemurian to Pliensbachian stages around 191 million years ago. This genus and related genera at the time lived on the supercontinent Laurasia. Its fossils have been found near Charmouth in Dorset, England, and are known for their excellent preservation. Scelidosaurus has been called the earliest complete dinosaur. It is the most completely known dinosaur of the British Isles. Scelidosaurus is currently the only classified dinosaur found in Ireland. Despite this, a modern description is still lacking. After initial finds in the 1850s, comparative anatomist Richard Owen named and described Scelidosaurus in 1859. Only one species, Scelidosaurus harrisonii named by Owen in 1861, is considered valid today, although one other species was proposed in 1996.

Scelidosaurus was about 4 metres (13 ft) long. It was a largely quadrupedal animal, feeding on low scrubby plants, the parts of which were bitten off by the small, elongated head to be processed in the large gut. Scelidosaurus was lightly armoured, protected by long horizontal rows of keeled oval scutes that stretched along the neck, back and tail.

One of the oldest known and most "primitive" of the thyreophorans, the exact placement of Scelidosaurus within this group has been the subject of debate for nearly 150 years. This was not helped by the limited additional knowledge about the early evolution of armoured dinosaurs. Today most evidence indicates that Scelidosaurus is the sister taxon to the two main clades of Thyreophora, the Stegosauridae and Ankylosauria.