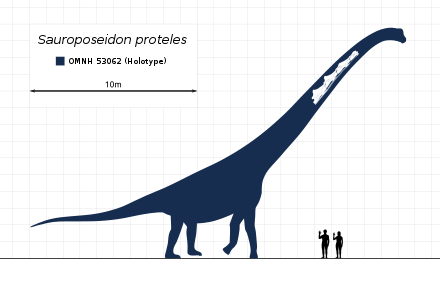 Sauroposeidon ( SOR-o-po-SY-dan; meaning "earthquake god lizard", after the Greek god Poseidon) is a genus of sauropod dinosaur known from several incomplete specimens including a bone bed and fossilized trackways that have been found in the American states of Oklahoma, Wyoming, and Texas. The fossils were found in rocks dating from near the end of the Early Cretaceous (Aptian-early Albian), a time when sauropod diversity in North America had greatly diminished. It was the last known North American sauropod prior to an absence of the group on the continent of roughly 40 million years that ended with the appearance of Alamosaurus during the Maastrichtian.

While the holotype remains were initially discovered in 1994, due to their unexpected age and unusual size they were initially misclassified as pieces of petrified wood. A more detailed analysis in 1999 revealed their true nature which resulted in a minor media frenzy, and formal publication of the find the following year.

Paleoecological analysis indicates that Sauroposeidon lived on the shores of the Gulf of Mexico, in a river delta. Extrapolations based on the more completely known Brachiosaurus indicate that the head of Sauroposeidon could reach 18 m (59 ft) in height with its neck extended, which would make it the tallest known dinosaur. With an estimated length of up to 34 m (112 ft) and a mass of 50-60 t (55-66 short tons), it also ranks among the longest and heaviest. However, this animal may not be as closely related to Brachiosaurus as previously thought, so these estimates may be inaccurate.

While initially described as a brachiosaurid closely related to Brachiosaurus and Giraffatitan, the discovery of additional remains in the Cloverly Formation of Wyoming suggested that it was in fact more closely related to the titanosaurs, in the group Somphospondyli. Analysis of these remains and comparison with others from Texas supported this conclusion, and demonstrated that the more completely known sauropods from the Twin Mountains Formation (including a partial skull and fossil trackways) previously named Paluxysaurus jonesi also belonged to Sauroposeidon.