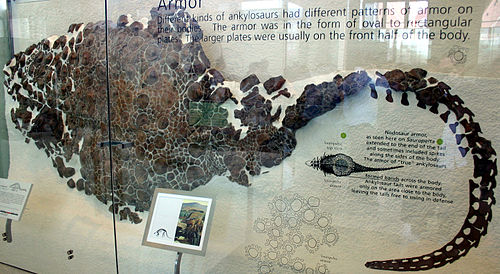 Sauropelta ( SAWR-o-PEL-ta; meaning 'lizard shield') is a genus of nodosaurid dinosaur that existed in the Early Cretaceous Period of North America. One species (S. edwardsorum) has been named although others may have existed. Anatomically, Sauropelta is one of the most well-understood nodosaurids, with fossilized remains recovered in the U.S. states of Wyoming, Montana, and possibly Utah. It is also the earliest known genus of nodosaurid; most of its remains are found in a section of the Cloverly Formation dated to 108.5 million years ago.

It was a medium-sized nodosaurid, measuring about 5.2 metres (17.1 ft) long. Sauropelta had a distinctively long tail which made up about half of its body length. Although its body was smaller than a modern black rhinoceros, Sauropelta was about the same mass, weighing in at about 1,500 kilograms (3,300 lb). The extra weight was largely due to its extensive covering of bony armor, including the characteristically large spines projecting from its neck.