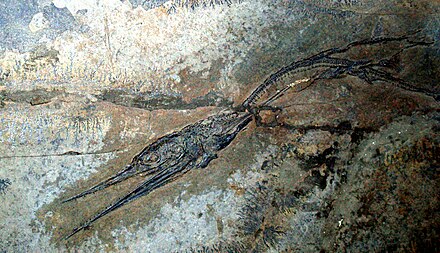 Saurichthys ('lizard fish') is an extinct genus of ray-finned fish from the Triassic period. Fossils have been found worldwide.

Fossil evidence, in the form of a bolus of bones in the same strata, indicates that Saurichthys attacked, or possibly scavenged the corpses of fishing pterosaurs such as Preondactylus.

Their closest modern-day relatives include the sturgeons, paddlefish, and the bowfins.