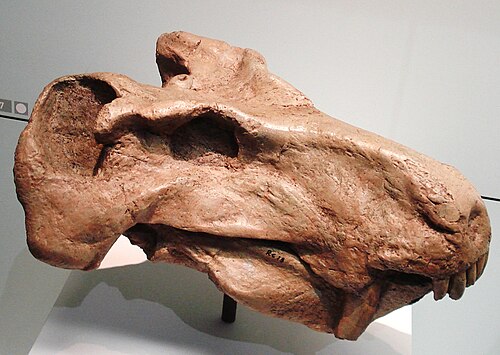 Rubidgea is an extinct genus of therapsid belonging to the Gorgonopsidae. It had very large canines functioning as saber-teeth, longer than the teeth of the dinosaur Tyrannosaurus rex. It lived in the Permian period, specifically the Wuchiapingian Stage. Rubidgea reached a length of 3.4 metres (11 ft) and had a 46 centimetres (1.51 ft) long skull. Rubidgea was native to what is now South Africa, and based on its overall morphology, is considered to be the most robust and powerful of the gorgonopsids known. Though some of its relatives, such as the Russian Inostrancevia were as large or larger, they were far more slender in build when compared to Rubidgea.