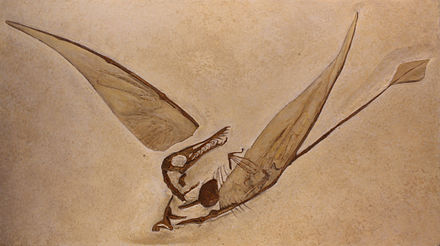 Rhamphorhynchus (, "beak snout") is a genus of long-tailed pterosaurs in the Jurassic period. Less specialized than contemporary, short-tailed pterodactyloid pterosaurs such as Pterodactylus, it had a long tail, stiffened with ligaments, which ended in a characteristic diamond-shaped vane. The jaws of Rhamphorhynchus housed needle-like teeth, which were angled forward, with a curved, sharp, beak-like tip lacking teeth, indicating a diet mainly of fish; indeed, fish and cephalopod remains are frequently found in Rhamphorhynchus' abdominal contents, as well as in their coprolites.

Although fragmentary fossil remains possibly belonging to Rhamphorhynchus have been found in England, Tanzania, and Spain, the best preserved specimens come from the Solnhofen limestone of Bavaria, Germany. Many of these fossils preserve not only the bones but impressions of soft tissues, such as wing membranes. Scattered teeth believed to belong to Rhamphorhynchus have been found in Portugal as well.