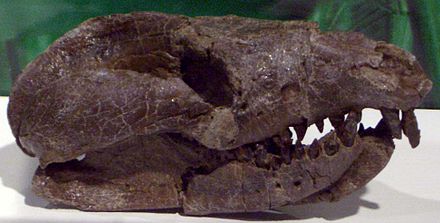 Repenomamus is a gobiconodontid mammal genus containing two species, Repenomamus robustus and Repenomamus giganticus. Both species are known from fossils found in China that date to the early Cretaceous period, about 125-123.2 million years ago. R. robustus is one of several Mesozoic mammals for which there is good evidence that it fed on vertebrates, including dinosaurs, though it is not possible to determine if it actively hunted live dinosaurs or scavenged dead ones. R. giganticus is among the largest mammals known from the Mesozoic era.