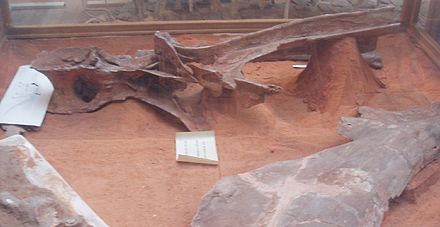 Rebbachisaurus is a genus of sauropod dinosaur of the superfamily Diplodocoidea, estimated at 14 metres (46 ft) to 20 metres (66 ft) in length, and 7 metric tons (7.7 short tons) in weight, that lived during the Early-Late Cretaceous period in Africa about 99 million years ago. This massive four-legged plant-eating animal had a small head, a long, graceful neck and a whiplike tail. Rebbachisaurus is distinguished from other sauropods by its unusually tall, ridged back. The discovery of Rayososaurus, a South American sauropod nearly identical to Rebbachisaurus, supports the theory that there was still a land connection between Africa and South America during the Early Cretaceous, long after it was commonly thought the two continents had separated.