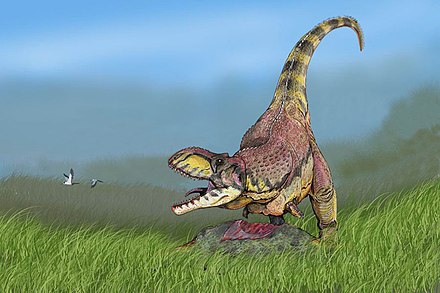 Rajasaurus ('Raja' meaning "king" (derived from Sanskrit) here,"king of lizards") is a genus of carnivorous abelisaurian theropod dinosaur with an unusual head crest. Between 1982 and 1984, its fossilized bones were discovered by Suresh Srivastava of the Geological Survey of India (GSI). Excavated from the Narmada River valley in Rahioli in the Mahisagar district of Gujarat, India, the find was announced as a new genus of dinosaur by American and Indian scientists on August 13, 2003.

Paleontologists Paul Sereno of the University of Chicago, Jeff Wilson of the University of Michigan, and Srivastava worked together as an Indo-American group to study the Narmada River fossils. The fossils represented the partial skeleton of the new species Rajasaurus narmadensis, which means "princely lizard from the Narmada Valley." The fossilized bones of Rajasaurus have also been found in the upriver region of the Narmada, at Jabalpur, in the state of Madhya Pradesh.