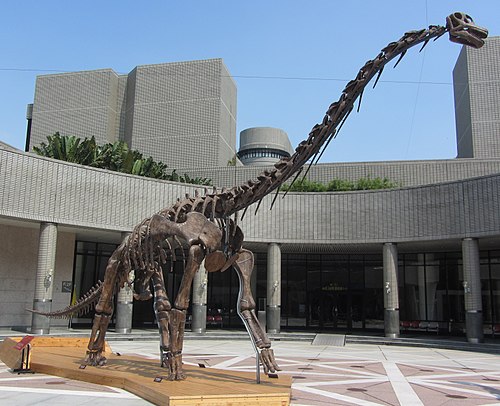 Qiaowanlong is a genus of sauropod dinosaur. Fossils belonging to the genus were found in 2007 from the Yujinzi Basin of Gansu, China, and were described in 2009 in the Proceedings of the Royal Society B. The remains come from a geological formation called the Xinminpu Group, dating to the Early Cretaceous (Albian stage) about 100 Ma. The only known specimen consists of articulated cervical (neck) vertebrae and a right pelvic girdle, as well as several unidentified bone fragments. Qiaowanlong was initially reported as the first brachiosaurid to have been found from China. However, later analysis found that it was more closely related to titanosauriformes like Euhelopus and Erketu. It is estimated to have had a length of around 12 metres (39 ft) and would have weighed around 6 tonnes. The type species is Q. kangxii.