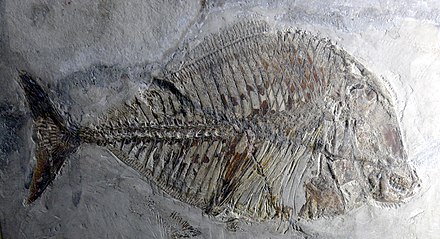 Pycnodus (from Greek for crowded teeth) is an extinct genus of ray-finned fish ranging from the Cretaceous to Eocene periods. As its name suggests, it is the type genus of Pycnodontiformes.

The known whole fossils of Pycnodus are around 12 centimetres (5 in) long, and have a superficial resemblance to angelfish or butterflyfish. The animals, as typical of all other pycnodontids, had many knob-like teeth, forming pavements in the jaws with which to break and crush hard food substances, probably mollusks and echinoderms. These teeth are the most common form of fossil.

Pycnodus fossils have been found in present-day India, Northern Africa, Belgium, England, and Italy, regions corresponding with the Tethys Ocean.