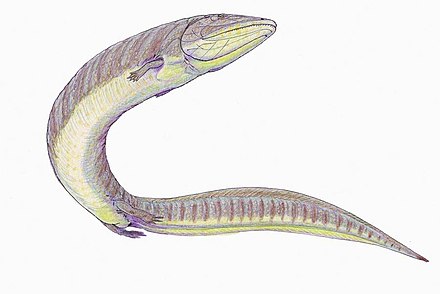 Pteroplax ( meaning finned tablet) is an extinct genus of Reptiliomorpha. It may be the same as Eogyrinus. Pteroplax dates from the late Carboniferous, 290 million years ago. It grew to be 15 ft(4.5m)and was 550 lbs(250 kg). On land, Pteroplax was slow and cumbersome, but in the water, it moved fast in search of prey. It had a long, eel- like body, with short limbs and a long tail. It spent most of its life in water, with the right adaptations for it. It had small, webbed feet on its back legs, but mostly used its tail. It had a long head, which was full of many sharp teeth on the upper and lower jaws. It was the top predator in the swamps in which it lived in. They were found in Europe.