PTERODACTYLUS
(teh-roe-dack-till-us (the p is silent and not pronounced))
meaning: "Winged finger" 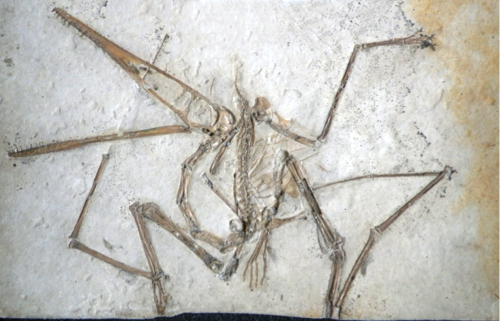 The fossil remains of this species have been found primarily in the Solnhofen limestone of Bavaria, Germany, dated to the late Jurassic Period (early Tithonian), about 150.8-148.5 million years ago, though more fragmentary remains have been tentatively identified from elsewhere in Europe and in Africa.

It was a carnivore and probably preyed upon fish and other small animals. Like all pterosaurs, Pterodactylus had wings formed by a skin and muscle membrane stretching from its elongated fourth finger to its hind limbs. It was supported internally by collagen fibres and externally by keratinous ridges.