PTERANODON
(teh-ran-oh-don (the 'p' is silent and not pronounced))
meaning: "Toothless wing" 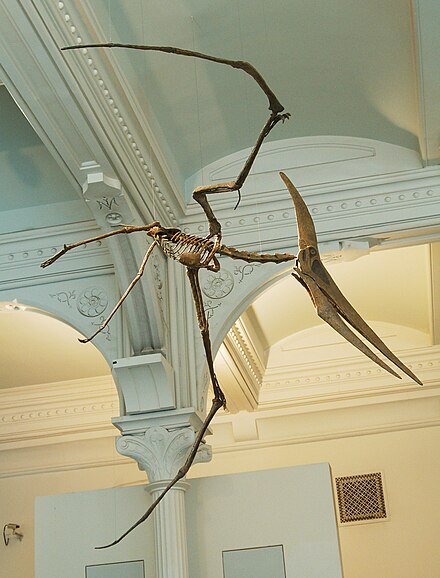 Pteranodon (from Greek pteron ("wing") and anodon ("toothless") is a genus of pterosaurs which included some of the largest known flying reptiles, with wingspans over 6 metres (20 ft). They lived during the late Cretaceous geological period of North America in present-day Kansas, Alabama, Nebraska, Wyoming, and South Dakota. More fossil specimens of Pteranodon have been found than any other pterosaur, with about 1,200 specimens known to science, many of them well preserved with nearly complete skulls and articulated skeletons. It was an important part of the animal community in the Western Interior Seaway.

Pteranodon were pterosaurs, not dinosaurs. By definition, all dinosaurs belong to one of the two groups within Dinosauria, i.e. Saurischia or Ornithischia. As such, this excludes pterosaurs. Nonetheless, Pteranodon are frequently featured in dinosaur media and are strongly associated with dinosaurs by the general public. While not dinosaurs, they form a sister clade to dinosaurs within the clade Avemetatarsalia.