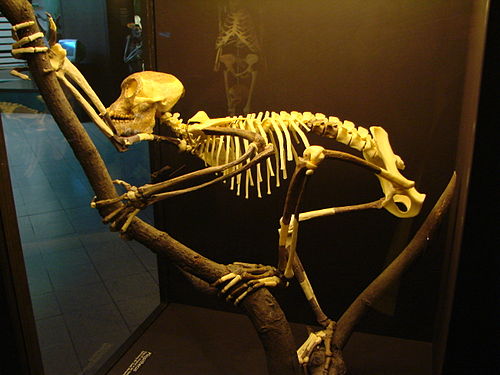 Proconsul is an extinct genus of primates that existed from 23 to 25 million years ago during the Miocene epoch. Fossil remains are present in Eastern Africa including Kenya and Uganda. Four species have been classified to date: P. africanus, P. gitongai, P. major and P. meswae. The four species differ mainly in body size. Environmental reconstructions for the Early Miocene Proconsul sites are still tentative and range from forested environments to more open, arid grasslands.

The gibbons, great apes and humans are held in evolutionary biology to share a common ancestral lineage, which may have included Proconsul. Its name, meaning "before Consul" (Consul being a certain chimpanzee that, at the time of the genus's discovery, was on display in London), implies that it is ancestral to the chimpanzee, which if true would also make it ancestral to the rest of the apes.