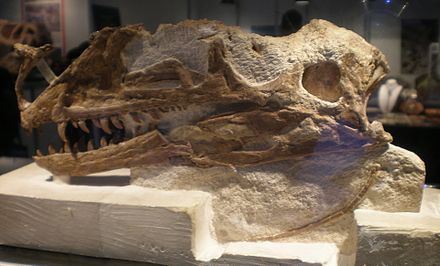 Proceratosaurus is a genus of small-sized (~3 metres (9.8 ft) long) carnivorous theropod dinosaur from the Middle Jurassic (Bathonian) of England. It was originally thought to be an ancestor of Ceratosaurus, due to the similar small crest on its snout. Now, however, it is considered a coelurosaur, specifically one of the earliest known members of Tyrannosauroidea, the clade of basal relatives of the tyrannosaurs.

The type specimen is held in the London Museum of Natural History and was recovered in 1910 at Minchinhampton while excavating for a reservoir.