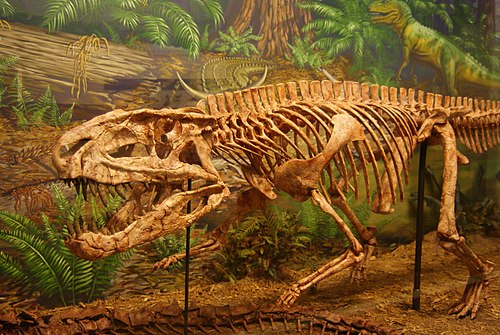 Postosuchus, meaning "Crocodile from Post", is an extinct genus of rauisuchid reptiles comprising two species, P. kirkpatricki and P. alisonae, that lived in what is now North America during the Late Triassic. Postosuchus is a member of the clade Pseudosuchia, the lineage of archosaurs that includes modern crocodilians (the other main group of archosaurs is Avemetatarsalia, the lineage that includes non-avian dinosaurs and their descendants, birds). Its name refers to Post Quarry, a place in Texas where many fossils of the type species, P. kirkpatricki, were found. It was one of the apex predators of its area during the Triassic, larger than the small dinosaur predators of its time (such as Coelophysis). It was a hunter which probably preyed on dicynodonts and many other creatures smaller than itself.

The skeleton of Postosuchus is large and robust with a deep skull and a long tail. The total body length is about 4 to 5 metres (13 to 16 ft). The extreme shortness of the forelimbs relative to the hind limbs, the very small hands, and measurements of the vertebrae suggest that Postosuchus may have been committed to bipedal locomotion.