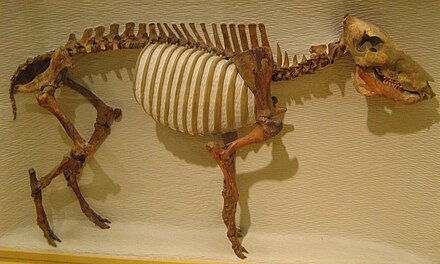 Platygonus ("flat head" in reference to the straight shape of the forehead) is an extinct genus of herbivorous peccaries of the family Tayassuidae, endemic to North America from the Miocene through Pleistocene epochs (10.3 million to 11,000 years ago), existing for about 10.289 million years.

Platygonus were gregarious animals and, like modern peccaries, possibly traveled in herds. At least nine known species of Platygonus are known and ranged from southern Canada to Mexico and from California to Pennsylvania. Stratigraphically, they occur throughout the Pleistocene (Calabrian), and as early as the Blancan in the Gelasian of the Pliocene. The most recent credible date obtained for some species remains is about 11,000 BP.