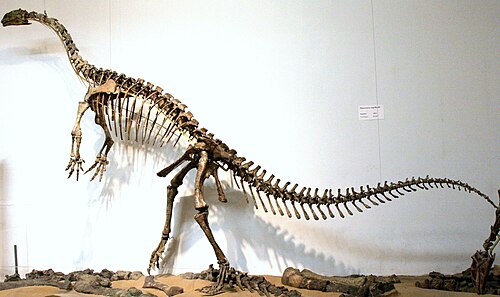 Plateosaurus (probably meaning "broad lizard", often mistranslated as "flat lizard") is a genus of plateosaurid dinosaur that lived during the Late Triassic period, around 214 to 204 million years ago, in what is now Central and Northern Europe. Plateosaurus is a basal (early) sauropodomorph dinosaur, a so-called "prosauropod". As of 2011, two species are recognized: the type species P. engelhardti from the late Norian and Rhaetian, and the slightly earlier P. gracilis from the lower Norian. However, others have been assigned in the past, and there is no broad consensus on the species taxonomy of plateosaurid dinosaurs. Similarly, there are a plethora of synonyms (invalid duplicate names) at the genus level.

Discovered in 1834 by Johann Friedrich Engelhardt and described three years later by Hermann von Meyer, Plateosaurus was the fifth named dinosaur genus that is still considered valid. Although it had been described before Richard Owen formally named Dinosauria in 1842, it was not one of the three genera used by Owen to define the group, because at the time, it was poorly known and difficult to identify as a dinosaur. It is now among the dinosaurs best known to science: over 100 skeletons have been found, some of them nearly complete. The abundance of its fossils in Swabia, Germany, has led to the nickname Schwabischer Lindwurm (Swabian lindworm).

Plateosaurus was a bipedal herbivore with a small skull on a long, flexible neck, sharp but plump plant-crushing teeth, powerful hind limbs, short but muscular arms and grasping hands with large claws on three fingers, possibly used for defence and feeding. Unusually for a dinosaur, Plateosaurus showed strong developmental plasticity: instead of having a fairly uniform adult size, fully grown individuals were between 4.8 and 10 metres (16 and 33 ft) long and weighed between 600 and 4,000 kilograms (1,300 and 8,800 lb). Commonly, the animals lived for at least 12 to 20 years, but the maximum life span is not known.

Despite the great quantity and excellent quality of the fossil material, Plateosaurus was for a long time one of the most misunderstood dinosaurs. Some researchers proposed theories that were later shown to conflict with geological and palaeontological evidence, but have become the paradigm of public opinion. Since 1980 the taxonomy (relationships), taphonomy (how the animals became embedded and fossilized), biomechanics (how their skeletons worked), and palaeobiology (life circumstances) of Plateosaurus have been re-studied in detail, altering the interpretation of the animal's biology, posture and behaviour.