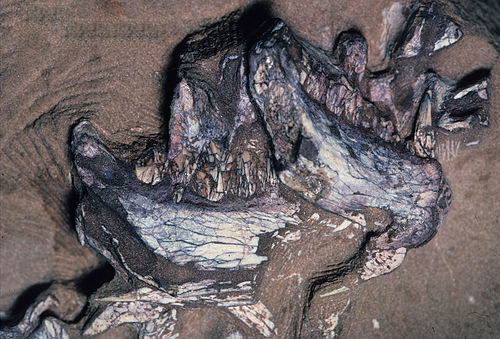 Pegomastax ("strong jaw") is a genus of heterodontosaurid dinosaur discovered in Lower Jurassic rocks in South Africa. It is based on SAM-PK-K10488, a partial skull including a postorbital bone, both dentaries (the tooth-bearing bone of the lower jaw), and a predentary (a toothless beak-like bone found at the tip of the lower jaw). From head to tail the parrot-like herbivore measured no more than 60 cm.

This specimen was found in Voyizane, Joe Gqabi District, Cape Province, in rocks of the upper Elliot Formation, a rock formation that dates to the early part of the Early Jurassic (Hettangian-Sinemurian, approximately 200 to 190 million years ago). It was collected during a 1966-1967 expedition but not formally named and described until 2012, when Paul Sereno, who had recognized it as unusual in the 1980s, published a description. The type species is P. africana. Pegomastax differed from other heterodontosaurids by details of the skull. The lower jaw was robust, with a short beak. Like most other heterodontosaurids, Pegomastax had an enlarged canine-like tooth at the beginning of the lower jaw's tooth row, which may have had a defensive function.