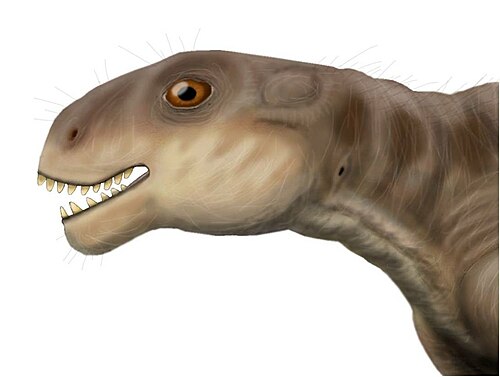 Patranomodon (from Greek, patra meaning "father", "father of anomodonts") is an extinct genus belonging to the group of anomodontia. Rubidge and Hopson named this anomodont after discovering its skull. Anomodontia is a group of terrestrial organisms that roamed the land on four limbs. Other genus belonging to the same group of anomodontia include Suminia, being the most complete basal anomodont, however Patranomodon being the most primitive. Patranomodon is the sister taxon to Dicynodon, which belongs to the group of Dicynodontia. Dicynodontia is known to be a carnivore unlike the Patranomodon, whom feeds on plant material. It is also a sister taxa to Galechirus, Galeops, and Galepus. Patranomodon believed to range in the Karoo of Southern Africa, however it is proposed that anomodonts ranged from the European continent (known as today) to the southern region of Africa as well as China and India. This is because the continents that we know today as Europe, Asia, and Africa, were connected in one very large land mass. This land mass was walk-able for many terrestrial organisms, and was called Pangaean. Patranomodon roamed this planet during the middle to late Permian era, which were about 268 to 265 million years ago. These land dwelling creatures belong to a group of Synapsida Therapsida.