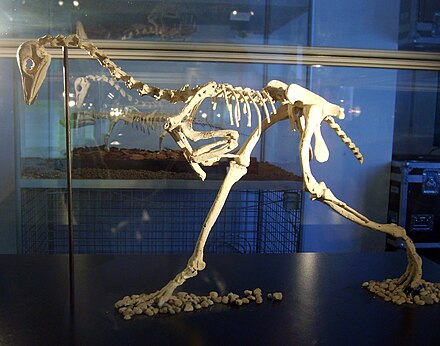 Patagopteryx is an extinct monotypic genus of birds that lived during the Late Cretaceous, around 80 mya, in what is now the Sierra Barrosa in northwestern Patagonia, Argentina. About the size of a chicken, it is the earliest known unequivocal example of secondary flightlessness: its skeleton shows clear indications that the ancestors of Patagopteryx were flying birds.

Located in strata of the Santonian Bajo de la Carpa Formation, the original remains were discovered by Oscar de Ferrariis, Director of the Natural History Museum of the Comahue National University in Neuquen around 1984-5. He passed them onto noted paleontologist Jose Bonaparte, who described the species Patagopteryx deferrariisi in 1992.