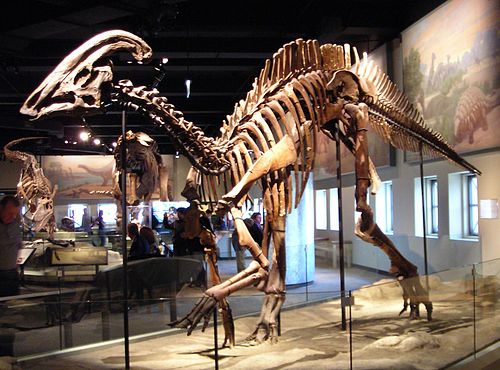 Parasaurolophus ( PARR-a-saw-ROL-a-fas or PARR-a SAW-ra-LOH-fas; meaning "near crested lizard" in reference to Saurolophus) is a genus of ornithopod dinosaur that lived in what is now North America during the Late Cretaceous Period, about 76.5-74.5 million years ago. It was a herbivore that walked both as a biped and a quadruped. Three species are recognized: P. walkeri (the type species), P. tubicen, and the short-crested P. cyrtocristatus. Remains are known from Alberta (Canada), and New Mexico and Utah (United States). The genus was first described in 1922 by William Parks from a skull and partial skeleton found in Alberta.

Parasaurolophus was a hadrosaurid, part of a diverse family of Cretaceous dinosaurs known for their range of bizarre head adornments. This genus is known for its large, elaborate cranial crest, which at its largest forms a long curved tube projecting upwards and back from the skull. Charonosaurus from China, which may have been its closest relative, had a similar skull and potentially a similar crest. Visual recognition of both species and sex, acoustic resonance, and thermoregulation have been proposed as functional explanations for the crest. It is one of the rarer hadrosaurids, known from only a handful of good specimens.