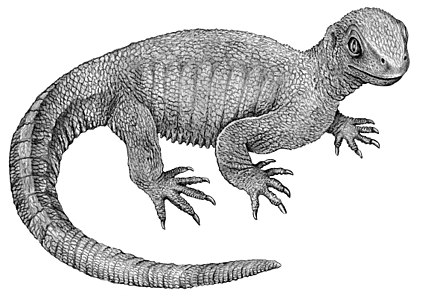 Pappochelys (meaning "grandfather turtle" in Greek) is an extinct genus of diapsid reptile closely related to turtles. The genus contains only one species, Pappochelys rosinae, from the Middle Triassic of Germany, which was named by paleontologists Rainer Schoch and Hans-Dieter Sues in 2015. The discovery of Pappochelys provides strong support for the placement of turtles within Diapsida, a hypothesis that has long been suggested by molecular data, but never previously by the fossil record. It is morphologically intermediate between the definite stem-turtle Odontochelys from the Late Triassic of China and Eunotosaurus, a reptile from the Middle Permian of South Africa.