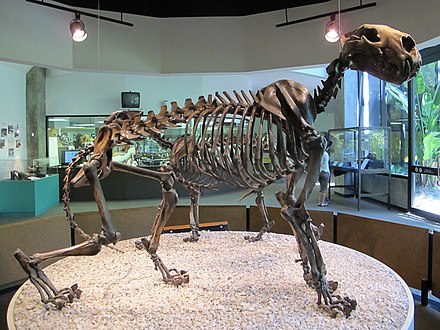 The American lion (Panthera leo atrox or P. atrox) - also known as the North American lion, Naegele's giant jaguar or American cave lion - is an extinct lion of the family Felidae, endemic to North America during the Pleistocene epoch (340,000 to 11,000 years ago), existing for about 0.33 million years. It has been shown by genetic analysis to be a sister lineage to the Eurasian cave lion (Panthera leo spelaea or P. spelaea). It was part of the abundant Pleistocene megafauna, a wide variety of very large mammals that lived at the time. The most abundant remains have come from the La Brea Tar Pits.

The American lion is one of the largest types of cat ever to have existed, slightly larger than the early Middle Pleistocene primitive cave lion, P. leo fossilis, and about 25% larger than the modern African lion.