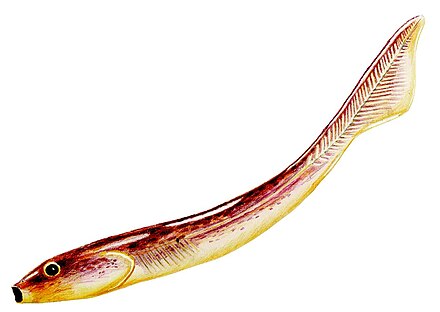 The fossil as preserved is carbonized, and indicates an eel-shaped animal of up to 6 centimetres (2 in) in length. The skull, which must have consisted of hardened cartilage, exhibits pairs of nasal and auditory capsules, with a gill-apparatus below its hinder part, but no indications of ordinary jaws.

The phylogeny of this bizarre fossil has puzzled scientists since its discovery in 1890, and many taxonomies have been suggested. In 2004, researchers proposed that Palaeospondylus was a larval lungfish. Previously it had been classified as a larval tetrapod, unarmored placoderm, an agnathan, and a chimera.