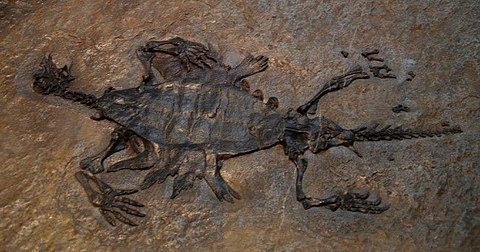 Odontochelys semitestacea (meaning "toothed turtle with a half-shell") is a Late Triassic relative of turtles. Before Pappochelys was discovered it was considered the oldest undisputed stem turtle. It is the only known species in the genus Odontochelys and the family Odontochelyidae. O. semitestacea was first described from three 220-million-year-old specimens excavated in Triassic deposits in Guizhou, China.

Odontochelys differed grossly from modern turtles. Modern turtles have a horny beak without teeth in their mouth. In contrast, Odontochelys fossils were found to have had teeth embedded in their upper and lower jaws. One of the most striking features of turtles, both modern and prehistoric alike, are their dorsal shells, forming an armored carapace over the body of the animal. Odontochelys only possessed the bottom portion of a turtle's armor, the plastron. It did not yet have a solid carapace as most other turtles do. Instead of a solid carapace, Odontochelys possessed broadened ribs like those of modern turtle embryos that still have not started developing the ossified plates of a carapace.

Aside from the presence of teeth and the absence of a solid carapace, a few other skeletal traits distinguish Odontochelys as basal compared to other turtles, extant and otherwise. The point of articulation between the dorsal ribs and the vertebrae are decidedly different in Odontochelys than in later turtles. In a comparison of skull proportions, the skull of Odontochelys is far more elongated pre-orbitally (in front of the eyes) compared to other turtles. The tail of the prehistoric turtle was longer in proportion to its body than other turtles. In addition, the transverse processes found in the tail are not fused such as in later turtles. Also, the scapulae of the examined specimens were identified to lack acromion processes. Taken together, these anatomical differences have been interpreted by the discoverers to mean that Odontochelys has some of the most primitive features ever seen in a turtle and is somewhat of a transitional fossil. Some scientists, however, are skeptical of this idea.

Evidence that the plastron evolved before the carapace, as indicated by the lack of carapace in Odontochelys semitestacea is often viewed as an indication of the aquatic origin of turtles. The fossil was found in marine deposits, further supporting that the primitive turtle frequented shallow marine water. Since it is generally accepted that the shell arose to provide protection against predators, the semi-aquatic nature of turtles and the development of the plastron complement each other. Ancestral turtles with protection on their underside are more protected from predators that attack from below. Based on this interpretation, the development of the carapace was likely driven in a land animal.

Reisz and Head (2008), however, have a different interpretation on the same specimen. Instead, they suggest that the carapace on O. semitestacea was in fact present; it just lacked ossification of some of its dermal components. With this interpretation, the authors suggest that either turtle shells originally evolved in aquatic environments, or this fossil represents the earliest turtle traveling from terrestrial environments to marine habitats.

Even though the Odontochelys was found in marine deposits, it is still unclear whether it was primarily aquatic or a turtle transitioning from marine to terrestrial habitats.