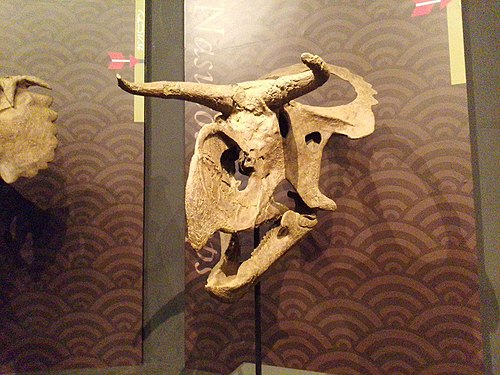 Nasutoceratops is an extinct genus of ceratopsian dinosaur. It is a basal centrosaurine which lived during the late Cretaceous period (late Campanian, about 76.0-75.5 Ma) in what is now southern Utah, United States. Nasutoceratops was a large, ground-dwelling, quadrupedal herbivore with a short-snout and unique rounded horns above its eyes that have been likened to those of modern cattle. Extending almost to the tip of its snout, these horns are the longest of all the members of the centrosaurine subfamily. The presence of pneumatic elements in the nasal bones of Nasutoceratops are a unique trait and are unknown in any other ceratopsid. Nasutoceratops and Diabloceratops are the only two centrosaurine dinosaurs from the American southwest.