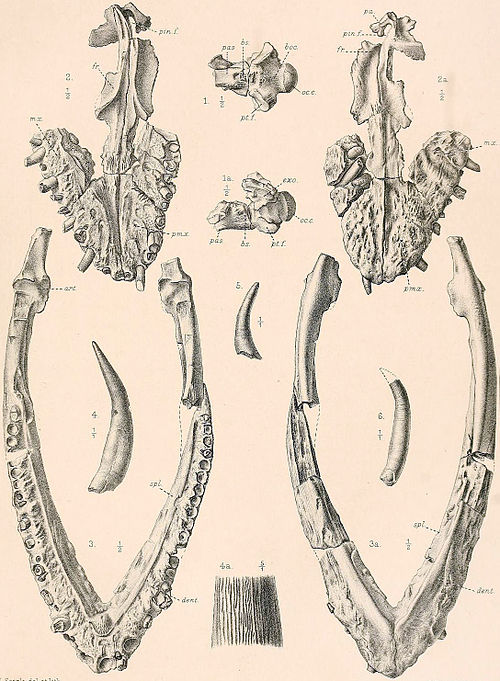 Muraenosaurus (from the Latin "Muraena" meaning "eel" and "Sauros" meaning lizard) is an extinct genus of cryptoclidid plesiosaur reptile from the Oxford Clay of Southern England. The genus was given its name due to the eel-like appearance of the long neck and small head. Muraenosaurus grew to lengths between 5 metres (16 ft) and 6 metres (20 ft) and dates roughly to between 160 Ma (million years ago) and 164 Ma in the Callovian of the middle Jurassic. Charles E. Leeds collected the first Muraenosaurus which was then described by H. G. Seeley. The specimen may have suffered some damage due to the casual style of Charles Leeds' collection. The first Muraenosaur was recovered with pieces missing from the skull and many of the caudal vertebrae absent. Because the animal was described from Charles Leeds' collection it was given the name Muraenosaurus Leedsi. M. leedsi is the most complete specimen belonging to the genus Muraenosaurus and also the only species that is undoubtedly a member of the genus. . Two other species have been tentatively referred to as members of the genus Muraenosaurus: M. reedii and Picrocleidus beloclis

Muraenosaurus reedii was discovered in Wyoming and described by Maurice Mehl of the University of Chicago. The fossilized fragments found consisted of pieces of the pectoral and pelvic girdles, several vertebrae, ribs, and a relatively complete left pectoral paddle. Connections between M. leedsi and M. reedii were drawn when examining the ribs structure and paddle of M. reedii. Both had a similarly shaped, elongated humerus and relatively short phalanges. The species M. reedii is in fact a junior synonym of Pantosaurus. Picrocleidus beloclis is another plesiosaur originating in the middle Jurassic and found in the Oxford clay formation. Picrocleidus has previously been considered synonymous with Muraenosaurus although there are doubts in the relationship between the two groupings.