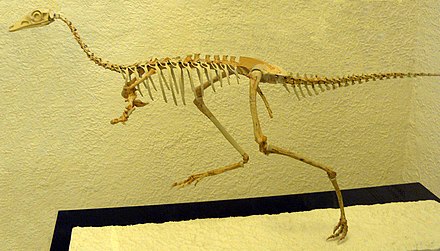 Mononykus ( ma-NON-i-kas, sometimes MON-oh-NY-kas; meaning "one claw") was a theropod dinosaur from late Cretaceous Mongolia (Nemegt Formation, about 70 million years ago) with long, skinny legs. It moved about on two legs, was likely very nimble and could run at high speeds, something that would have been useful in the open flood plains where it lived. It had a small skull, and its teeth were small and pointed, suggesting that it ate insects and small animals, such as lizards and mammals. Its large eyes might have allowed Mononykus to hunt by night, when it was cooler and there would have been fewer predators about. Mononykus was originally named Mononychus in 1993, but later that year, it was renamed because the original name had already been used for a beetle named by Johann Schueppel, a German entomologist.