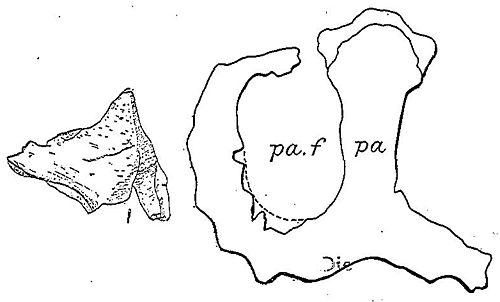 Monoclonius (meaning "single sprout") is a dubious genus of herbivorous ceratopsian dinosaurs found in the Late Cretaceous layers of the Judith River Formation in Montana, northern US, and the uppermost rock layers of the Dinosaur Park Formation in Alberta, Canada dated to between 75 and 74.6 million years ago.

Monoclonius was named by Edward Drinker Cope in 1876. Later, much taxonomic confusion was caused by the discovery of Centrosaurus, a very similar genus of ceratopsian, that is known from much better remains. Today, typical Monoclonius specimens are usually believed to be juveniles or subadults, in many cases of other genera such as Centrosaurus. Those specimens that remain under the name Monoclonius are mostly too incomplete or immature to be confidently matched with adult specimens from the same time and place. This is especially true of the type species, Monoclonius crassus. Therefore, Monoclonius is now usually considered a nomen dubium, pending further study.