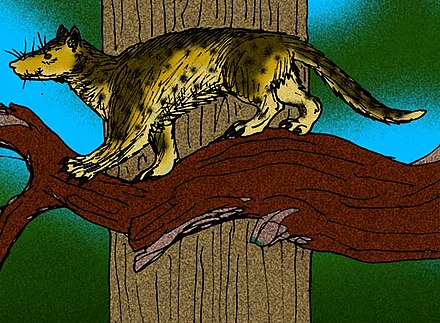 Miacis is a genus of extinct carnivorous mammals that appeared in the late Paleocene and continued through the Eocene. The genus Miacis is not monophyletic but a diverse collection of species that belong to the stemgroup within the Carnivoramorpha. As such, most Miacis species belong to the group of early carnivores that represent the ancestors of the modern order, the crown-group Carnivora. However, the species Miacis cognitus is placed not in the stem-group but among the Caniformia, one of the two suborders of the crown-group Carnivora.

Miacis species were five-clawed, about the size of a weasel (~30 cm), and lived on the North American and Eurasian continents. They retained some primitive characteristics such as low skulls, long slender bodies, long tails, and short legs. Miacis retained 44 teeth, although some reductions in this number were apparently in progress and some of the teeth were reduced in size.

The hind limbs were longer than the forelimbs, the pelvis was dog-like in form and structure, and some specialized traits were present in the vertebrae. It had retractable claws, agile joints for climbing, and binocular vision. Miacis and related forms had brains that were relatively larger than those of the creodonts, and the larger brain size as compared with body size probably reflects an increase in intelligence.

Like many other early carnivoramorphans, it was well suited for an arboreal climbing lifestyle with needle sharp claws, and had limbs and joints that resemble those of modern carnivorans. Miacis was probably a very agile forest dweller that preyed upon smaller animals, such as small mammals, reptiles, and birds, and might have also have eaten eggs and fruits.