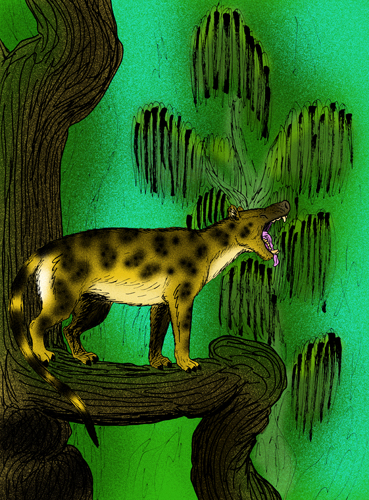 Mesonyx ("middle claw") is a genus of extinct, superficially wolf-like mesonychid mesonychian mammal: fossils of the various species are found in Early to Late Eocene-age strata in the United States and Early Eocene-aged strata in China, 51.8--51.7 Ma (AEO).

Mesonyx measured about 1.5 m (5 ft) long not including the tail, and weighted an estimated 22.7-34 kg. It was a fast predator from the Middle Eocene of Wyoming, and it probably hunted hoofed plant eaters, moving lightly on its toes. However, instead of claws, Mesonyx's toes ended in small hooves. Its long skull had a relatively large sagittal crest above the braincase to anchor large jaw muscles and give it a powerful bite.

Mesonyx specimens have been unearthed in Colorado, Wyoming, Utah and China. Mesonyx uintensis from the Upper Eocene of Wyoming is described as having a total cranium length of 429 mm. (17 inches) and a facial length of 206 mm (8 inches). Another specimen of Mesonyx uintensis is known from the Upper Eocene of northern Utah. Additional two species - Mesonyx uqbulakensis and M. nuhetingensis - have been described from the early Eocene Arshanto Formation in China.